Route Table: It contains a set of rules called routes which used to determine the network traffic from your gateway. VPC has an implicit router here route tables used to control where network traffic directed. Once a VPC peering connection is established, routing tables must be updated to establish any connections between the peered VPCs. These routes can be as specific as desired - even peering a VPC to only a single host on the other side of the connection.

Being highly selective in peering routing tables is a very effective way of minimizing the impact of the breach as resources outside of these routes are inaccessible to the peered VPC.

You can face an Overlapping issue if you have VPC peered with multiple VPCs, so that to overcome this issue to ensure that route tables are configured least access and avoid sending response traffic from your VPC to the incorrect VPC.

By default, a VPC peering connection is not created, By default Route Table ID start with rtb-xxxxxxxx in this it contains many tabs 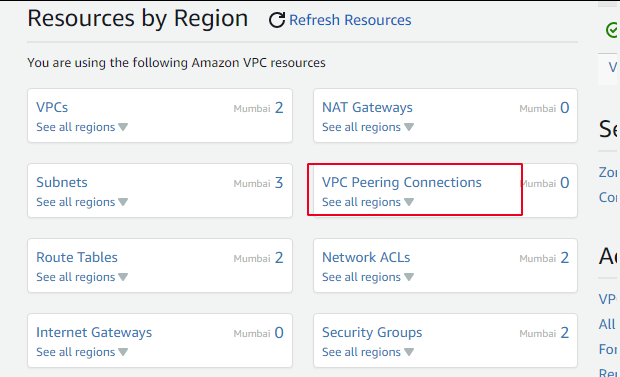 Routes: In this tab, we can see the destination, target status, and propagate. The following diagram shows the default value of Routes.

Subnet association see by default as per below diagram

1. List all the route tables from a VPC and check if "GatewayId" is pointing to an (e.g. pcx-1a2b3c4d) and if "DestinationCidrBlock" is as specific as desired.

In CLI use the following commands to change the policy